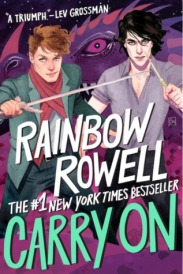 Simon Snow is the worst Chosen One who’s ever been chosen. That’s what his roommate, Baz, says. And Baz might be evil and a vampire and a complete git, but he’s probably right. Half the time, Simon can’t even make his wand work, and the other half, he starts something on fire. His mentor’s avoiding him, his girlfriend broke up with him, and there’s a magic-eating monster running around, wearing Simon’s face. Baz would be having a field day with all this, if he were here — it’s their last year at the Watford School of Magicks, and Simon’s infuriating nemesis didn’t even bother to show up.
Carry On – The Rise and Fall of Simon Snow is a ghost story, a love story and a mystery. It has just as much kissing and talking as you’d expect from a Rainbow Rowell story – but far, far more monsters. – Synopsis from Goodreads 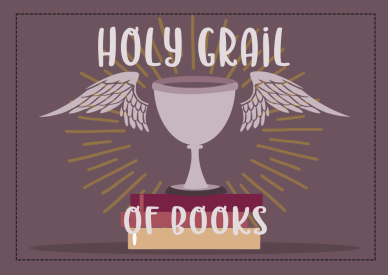 “He smiles, and he’s made of trouble.”

I decided to pick up Carry On by Rainbow Rowell after realizing that the story is based on the book within Fangirl, which just so happens to be one of my favourites. In Fangirl, Cather is obsessed with the Simon Snow world and by the end of Carry On so was I.

If you are wondering if you can jump in Carry On right away and skip Fangirl, the answer is yes. Personally, I’m really glad I read Fangirl first it got me introduced to the world and more hyped for it all. Rainbow Rowell said she couldn’t let the characters in the Simon Snow world go after finishing Fangirl, so she wrote their story. Which is awesome for us cause we get to enjoy this amazing book.

What you have to know about Carry On it is a Harry Potter-esque type story. It revolves around Simon Snow, the “chosen one”, and is roomate Basilton « Baz » Grimm-Pitch. Their relationship is somewhat complicated but as the story unfolds so does the relationship between them.  I don’t want to spoil anything so I wont say too much but you are going to love the level of sass and banter between these two, it is off the charts! There are some parts where I literally screamed with joy because of how it was playing out.

As in any good chosen one book, the friendships are at the epicentre of the story. Simon does have a Hermione type friend, named Penelope and she is brilliant. I love her so much, well to be fair I loved every single character, but Penelope was one of my favourites. She is, as any good side-kick should be, a brilliant witch and is always there to get Simon out of trouble (sometimes in trouble as well!). Though there friendship is tested at times, you cannot deny the love they have for one another.

This book is witty, funny, a bit heartbreaking and loads of fun. Oh and that ending? Holy crap on a cracker! I have no words, I didn’t expect it at all. It certainly kept me on the edge of my seat.

Lastly, can we talk about the new cover for a second? Hello beautiful! I have the first edition with the blue and yellow face silhouettes, but I am definitely getting this new one. It is a bit frustrating that fictional characters have a better sense of style then I do LOL

Everyone needs a little Simon and Baz in their life and thankfully we are getting more. SQUEEE!!!! The second book Wayward Son was set to come out in 2020 but it seemed to be pushed up to 2019 which is brilliant! Also, is Rainbow Rowell a Supernatural or Kanzas fan? If there is a third book will it be called «For there’ll be peace when you are done»? I gave this book a 5 out of 5. 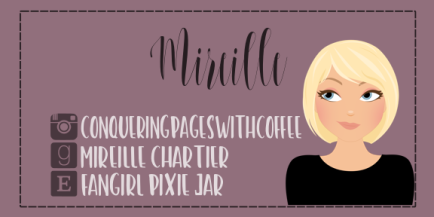