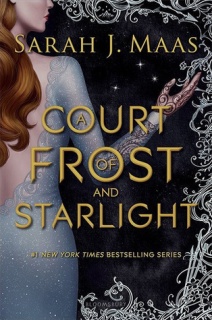 Hope warms the coldest night.  Feyre, Rhys, and their close-knit circle of friends are still busy rebuilding the Night Court and the vastly-changed world beyond. But Winter Solstice is finally near, and with it, a hard-earned reprieve.
Yet even the festive atmosphere can’t keep the shadows of the past from looming. As Feyre navigates her first Winter Solstice as High Lady, she finds that those dearest to her have more wounds than she anticipated–scars that will have far-reaching impact on the future of their Court. -Synopsis from Goodreads

“Deep inside me, rising with every swirling flake, a sparkling, crisp power stirred. I was High Lady of the Night Court.”

Yes! I loved this novella. It was exactly what I wanted and what I expected and I won’t apologize for being complete and utter trash for Maas.

I’m going to start this one off by addressing the insane raging hate that some people have been spewing about this novella. If you found it boring that’s totally reasonable and fine. Didn’t like the story? Again, that’s fair but chill out! I find it so maddening that the YA community is notoriously known for being completely toxic and mob-like and we prove it right constantly. What happened to just not liking a book? Why do you need to call people names and discredit their intelligence and attack an author? You aren’t a rebel because you bash Maas. Seriously, chill out.

Now, let’s get to the good stuff – the NOVELLA!!! This is basically a if Feyre, Rhys and the gang were to have a Christmas Special, this is completely all about that. You will not find a big plot and it’s not something you have to read to continue on with the series, it’s just for the hardcore fans that want to watch these characters have some nice holiday times. I seriously lived for it.

Not much time has passed since the recent war so they are all pretty tired and slowly piecing themselves and Velaris back together again. They are getting ready for the holidays and Feyre is trying to figure out what presents to get the whole gang – yes, it’s that kind of book! This would be such a fun holiday read. I’ll probably read it again in December. We get various POV’s in this book – Feyre, Rhys, Morrigan, Nesta, Cass and possible a couple more, so that was different and maybe gave us a little taste for what is to come. Since we won’t be with Feyre and Rhys in the four book in the series. I probably liked hearing from Morrigan most, out of the side characters. Mostly because hers actually gave a little more backstory and some of the stuff she’s been through and still going through. I was glad to get a little more insight into her and I hope I get lots more in the future.

Ok, what?!!?! Are we getting a Tamlin redemption arc in the future? It sure looks like it might go in that direction. I was really surprised to see Tamlin in this novella and even more shocked to see what he had become. Do I like him now? Not so much, he’s still a miserable person. However, did I feel like he could someday be redeemed? Maybe. He’s finally hit rock bottom and I mean ROCK BOTTOM and even if he’s a shitty person, I still felt sad for him in some ways. It was strange as all hell seeing Rhys take care of him and get him fed but as someone who has struggled through a debilitating depression, I felt for him and was honestly kind of happy that someone was checking in on him. I’m not sure he can be redeemed in Feyre or Rhys’s eyes but I don’t think he 100% needs to be. If he can pull himself back and make things right again, at least with Lucien and maybe start a new life then I think this character could be set right again. It’s amazing I even think that it’s possible because I really hate Tamlin lol

Elain was still fairly bland but I saw a little more potential in her character and I still don’t think she’ll end up with Lucien. I ship her with Az – Lucien needs to find someone else. I know a lot of people won’t like Nesta in this story but I could understand why she is isolating herself and not being a “nice girl.” The things she has been through would rock anyone’s world – I think we can give the woman a little time to be depressed and angry. It’s ok, she’s allowed.

Best parts of this book for me? Amren and her love of jewelry! Yass!! The girl has taste, what can she do? Morrigan and her horrible taste in gifts – she is like everyone’s grandmother with gifts, I love it. Also, Sauna and snowball fight? Need I say more? The book is worth reading for those scenes alone.

We also get the promised infamous wall scene. There wasn’t nearly as much sex in this novella as we’re used to seeing in her actual books but you get a little Rhys/Feyre action if you need a fix.

I would recommend this book if you want to read a Hallmark movie with Rhys and Feyre and the gang. Nothing much happens but I still loved just being around the characters again. If you are looking for a big plot driven book or really ANY action, then pass this novella by and just pick up the fourth installment when it comes out next year.