Ok, this post is going up way later because this readathon actually started at midnight last night.  I only just learned about it a few hours prior to that and didn’t have the energy to get a post up and ready before that, but I knew I wanted in!

#PrideHorrorthon is hosted by Emily (@BookHappy08) and Alex (@finding_montauk) on Twitter.  You can also find them over on Instagram with that same hashtag.  The readathon started June 26th and ends June 30th. The idea is to read all the queer horror you can all weekend.  You can also read horror that is written by a queer author (and doesn’t have queer characters).  There are no prompts, so you can just read whatever you feel like and no rules so anything goes – adult, middle-grade, graphic novels, etc.

I’ve had a HORRIBLE reading month this month, so I’m hoping this will push me into getting some last minute reads in.  This TBR is tentative and could change.  Wish me luck!

In the summer of 1986, Billy Collins is sent to his own personal Hell – summer camp. The remote Camp Genesis offers desperate parents a place to “straighten” out their gay teenagers with the help of the puritanical Katherine Creevey. Besides the typical horsing around, campfire tales and summer games, the Genesis program forces gay and questioning teens into humiliating gender-based lessons. While Billy wants nothing more than to escape Camp Genesis, he can’t help worrying that something even more sinister is hiding just out of sight.

The Possession of Natalie Glasgow by Hailey Piper

Margaret Willow has never met an eleven-year-old as dangerous as Natalie Glasgow. Natalie spends her days comatose, but at night she prowls her mother’s home, unnaturally strong and insatiably carnivorous. With doctors baffled, Natalie’s mother reaches out to Margaret, an expert in the supernatural. But even Margaret is mystified and terrified by Natalie’s condition. She’s dying, and before she dies, she might kill someone. Has a demon clawed its way inside an eleven-year-old girl? Or does the source of this nightmare lie with Natalie’s dead father? 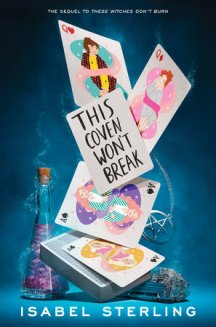 Hannah Walsh just wants a normal life. It’s her senior year, so she should be focusing on classes, hanging out with her best friend, and flirting with her new girlfriend, Morgan. But it turns out surviving a murderous Witch Hunter doesn’t exactly qualify as a summer vacation, and now the rest of the Hunters seem more intent on destroying her magic than ever. When Hannah learns the Hunters have gone nationwide, armed with a serum capable of taking out entire covens at once, she’s desperate to help. Now, with witches across the country losing the most important thing they have—their power—Hannah could be their best shot at finally defeating the Hunters. After all, she’s one of the only witches to escape a Hunter with her magic intact.

There are no more monsters anymore, or so the children in the city of Lucille are taught. With doting parents and a best friend named Redemption, Jam has grown up with this lesson all her life. But when she meets Pet, a creature made of horns and colours and claws, who emerges from one of her mother’s paintings and a drop of Jam’s blood, she must reconsider what she’s been told. Pet has come to hunt a monster, and the shadow of something grim lurks in Redemption’s house. Jam must fight not only to protect her best friend, but also to uncover the truth, and the answer to the question — How do you save the world from monsters if no one will admit they exist?

I think I’ll leave it at four.  I want to put a few more but this is already ambitious for me right now.   Have you read any of these? Did you do any readathons this month?

One thought on “#PrideHorrorthon TBR (last minute sign up!)”