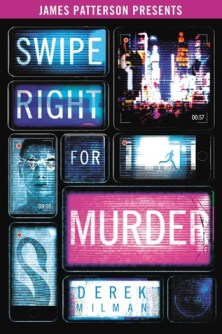 On the run from the FBI.
Targeted by a murderous cult.
Labeled a cyber-terrorist by the media.
Irritated texts from his best friend.
Eye contact with a nice-looking guy on the train.
Aidan has a lot to deal with, and he’s not quite sure which takes top priority.

Finding himself alone in a posh New York City hotel room for the night, Aidan does what any red-blooded seventeen-year-old would do—he tries to hook up with someone new. But that lapse in judgement leads to him waking up next to a dead guy, which sparks an epic case of mistaken identity that puts Aidan on the run from everyone—faceless federal agents, his eccentric family, and, naturally, a cyber-terrorist group who will stop at nothing to find him.

He soon realizes the only way to stop the chase is to deliver the object everyone wants, before he gets caught or killed. But for Aidan, the hardest part is knowing who he can trust not to betray him—including himself. – synopsis from Goodreads

“May you be in heaven a full half hour before the devil knows you’re dead.”

I was extremely excited to get my hands on an advanced copy of Swipe Right for Murder.  Derek’s book, Scream All Night was a favorite of mine last year.  It was fun, eccentric, heartfelt and hilarious.  I really hadn’t expected to fall in love with it the way I did, so you can bet I was screaming a little inside when this book showed up in my mail.  This is a complete departure from Derek’s debut novel, but he manages to still bring the heart and humor over – thank the book gods!

We start out with our main character, Aidan – who is in the city (without parents) to get a heart test the next day.  He meets up with his friends, they hang out a little and then call it a night but Aidan is restless and checks out Tinder.  Meets with a guy from school, goes awkward and is a total bust but that doesn’t stop little hormone driven Aidan.  He hits up Tinder once more and gets a hit.  This time it’s a success and he hooks up with a much older man.  Only problem is that the man he hooked up with gets killed in his room shortly after by a crazy cyber-terrorist group and they seem to think Aidan is involved in some really shady shit and they want some information or he’s probably not going to like the results – we know the drill.

This book gets fast-paced really early on.  I don’t want to give too much away because shit gets insane in this book.  I just had such a freaking blast with it.  You never knew where something was going from one minute to the next.  I loved the ethical questions it posed in between, without being preachy.  I certainly had to check myself a couple times when dealing with the homophobes in this story – I just got so angry about it all. You could almost sympathize with the terrorists at times. It was done in such an interesting way though – I know I’m being a little cryptic here but read it.  You’ll know what I’m talking about then.

This book isn’t the most realistic, so if that is going to bother you than maybe it won’t be for you but I can’t help but repeat how much flipping fun it is.  Not everything has to be based in 100% reality and this was a balls-the-walls thriller with a fantastic protagonist – lots of characters to mistrust and side-eye at and even a wee little bit of romance (ok lustmance is probably a more accurate word).

I’m super excited that Derek is being published under James Patterson Presents, they have been putting out some freaking amazing YA novels in the past couple years and I know this one is going to do well.  I predict New York Times for this one! Go get yourself a copy – completely worth it.