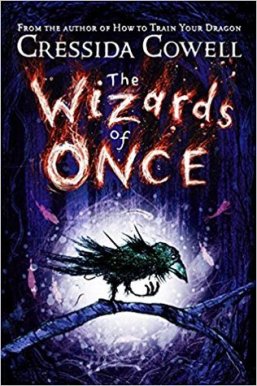 This is the story of a young boy Wizard and a young girl Warrior who have been taught to hate each other like poison; and the thrilling tale of what happens when their two worlds collide. Perfect for boys and girls who love fantasy adventure …Once there was Magic, and the Magic lived in the dark forests. Wizard boy, Xar, should have come in to his magic by now, but he hasn’t, so he wants to find a witch and steal its magic for himself. But if he’s got any chance of finding one, he will have to travel into the forbidden Badwoods. Xar doesn’t realise he is about to capture an entirely different kind of enemy.

A Warrior girl called Wish. And inside this book, at this very moment, two worlds collide and the fate of the land is changed forever. Xar and Wish must visit the dungeons at Warrior fort, and face the evil Queen.But something that has been sleeping for hundreds of years is stirring … Synopsis by Goodreads.

Wizards, warriors, sprites, witches, giants and lots more. Where do I sign up!?!?!

I’ve had the pleasure of reading this story twice now and I thoroughly enjoyed it both times. Wizards of Once features a young girl warrior and a young boy wizard. They are both complete and utter failures and outcasts in their tribes eyes but are constantly trying to prove their worth, for better or worse.

The boy, Xar is a wizard who was supposed to have his magic come in at 13 but it seems to have passed him by. He is incredibly desperate to get magic (by any means), so he can prove to everyone that he is truly “a boy of destiny.” I had a completely hate to love relationship with this character because he’s so arrogant and selfish that he makes it really hard for you to not want to smack him many times over. However, the parts where he is a little vulnerable were enough to show me that he really does care deeply for his family and friends – he’s just a bit of a wild child.

On the other hand, Wish, who is from the warrior tribe is the exact opposite. She doesn’t

think she is anything special and knows how different she is but she still wants to impress her mother. She is always searching for that approval. Wish is very kind-hearted and willing to hear other sides and not just jump to conclusions. I also love that no matter what her mother does and how evil it may be, Wish always thinks the best of her. That could be a flaw but I found it really endearing. She just sees the best in people. I love her so much.We also get some Dyslexia representation in this book, as Wish. It is never identified as such, because of the time period and world the book takes place in. However, it’s very clear it’s Dyslexia as they go into detail about the letters being mixed up in her head and struggling with reading and writing because of it. We also see her write a couple of things and the letters are all out of order. I think the rep seems well done and it’s not something that holds her back – she knows she struggles with it but keeps trying.

Xar has decided the way to prove himself is to catch a witch, who are supposed to be extinct and make them give him their magic. Not the best of plans but he does have a good (if oddball) bunch of followers that comprise of sprites, giants, snowcats, a crow, a bear and a wolf. It’s quite the entourage but they are willing to do just about anything for him, even if he is being completely nuts. On his journey to find a witch, a bunch of chaos breaks out and he bumps into Wish and the story goes from there.

I don’t want to give too much away but, obviously witches do come in to play in this story and they aren’t at all friendly or nice. Wish and Xar have to work together to try and defeat them, even though they have been taught to hate each other. There is tons of adventure and fun characters. Lots of societal commentary about the roles of girls and boys and what is expected of them. I really liked what roles they ended up playing and how it all turned out. Xar and Wish are fantastic protagonist and kids are bound to cozy right up to them.

There are also really fun illustrations all through-out this book, that make the story come alive even more. If you enjoy a good, fun adventure then I would certainly pick up this one. Younger kids could surely enjoy this one as early as probably five or six. There’s nothing too scary in the book, just lots of fun times.

Illustrations are taken from the novel Wizards of Once.

19 thoughts on “Middle Grade Monday: Wizards of Once by Cressida Cowell”