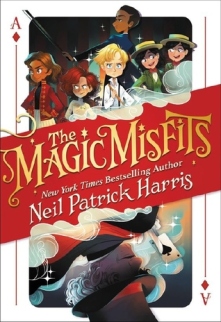 From beloved award-winning actor, Neil Patrick Harris, comes the magical first book in a new series with plenty of tricks up its sleeve. When street magician Carter runs away, he never expects to find friends and magic in a sleepy New England town. But like any good trick, things change instantly as greedy B.B. Bosso and his crew of crooked carnies arrive to steal anything and everything they can get their sticky fingers on. After a fateful encounter with the local purveyor of illusion, Dante Vernon, Carter teams up with five other like-minded kids. Together, using both teamwork and magic, they’ll set out to save the town of Mineral Wells from Bosso’s villainous clutches. These six Magic Misfits will soon discover adventure, friendship, and their own self-worth in this delightful new series. – synopsis from Goodreads

“For me, magic can be a story, a game, a puzzle, or a surprise that takes my breath away in a single, furious gulp.”

Fantastic! This is the kind of middle-grade adventure that parents are going to want to run out and grab for their family and read it over and over again.

I’m starting to be convinced that Neil Patrick Harris must come from a planet far superior to ours because this man does it all and does it well. While here I am, thinking not burning my toast in the morning is a pretty awesome success. I had actually somehow managed to miss the fact that Neil was writing a children’s book and then I was watching Booktube and noticed that people were getting them in their Owlcrate Jr (book subscription box) and I had to rush out and get myself a copy as well!

I almost feel guilty about giving this book four stars and the ONLY reason I did is because I didn’t have a child to read it with. I think that experience would’ve been magical. This book is heavily catered to children and families. Don’t get confused thinking I’m saying this is a Juvenile book, it isn’t. Adults will likely love this one as well. However, there are some stand out elements that really target a family audience. That being, this book is interactive. There a couple of neat puzzles to work out and most importantly at the end of every chapter (or most anyway) there is a step-by-step guide for learning a new magic trick. That’s brilliant! I wish I wasn’t so lazy and had tried a few but atlas… The tricks seemed cool enough to appeal to even older kids but simple enough to be able to have the younger audience master them as well.

This book reminded me so much of The Series of Unfortunate Events it was crazy. It’s very obvious that Harris was inspired by the book. I saw the author even ended up blurbing this book, so that is pretty damn cool. The Magic Misfitsis no where near as dark as the series Lemony Snickett brought to life but if you enjoyed that one then this likely a sure bet.

I was trying to think of what my favorite element is in this novel but I really struggled because it had a lot going for it. The cast is very diverse and felt very authentic. Since I am disabled, disability rep is always on my radar. I’m constantly looking out for good rep and honestly there isn’t that much. The rep in this book was great. One of the main protagonists friends is in a wheelchair and it’s not her plot point. Yes, it’s mentioned but it’s not what defines the character or what the focus is. She’s not just thrown in their for the sake of diversity is what I’m failing to say eloquently. I want more of this! The main protagonist is very relatable and I don’t think too many people have trouble connecting and identifying with him on some level.

There’s not much to not love about this book. You have adventure, magicians, strong friendship, a carnival (I’m a total sucker for any book with this theme.) and some crazy, hilarious villains. I will for sure to continue with this series and highly recommend picking it up.

One thought on “Middle Grade Monday: The Magic Misfits by Neil Patrick Harris”