Karthia is nothing like it used to be. The kingdom’s borders are open for the first time in nearly three hundred years, and raising the dead has been outlawed. Odessa is determined to explore the world beyond Karthia’s waters, hoping to heal a heart broken in more ways than she can count. But with Meredy joining the ocean voyage, vanquishing her sorrow will be a difficult task.  Despite the daily reminder of the history they share, Odessa and Meredy are fascinated when their journey takes them to a land where the Dead rule the night and dragons roam the streets. Odessa can’t help being mesmerized by the new magic–and by the girl at her side. But just as she and Meredy are beginning to explore the new world, a terrifying development in Karthia summons them home at once.

Growing political unrest on top of threats from foreign invaders means Odessa and Meredy are thrust back into the lives they tried to leave behind while specters from their past haunt their tenuous relationship. Gathering a force big enough to ward off enemies seems impossible, until one of Queen Valoria’s mages creates a weapon that could make them invincible. As danger continues to mount inside the palace, Odessa fears that without the Dead, even the greatest invention won’t be enough to save their fates. In this enthralling, heartrending sequel to Reign of the Fallen, Odessa faces the fight of her life as the boundaries between the Dead and the living are challenged in a way more gruesome than ever before. Synopsis from Goodreads.

“I’m Odessa of Grenwyr, and the dead answer to me.”

Wow! What a ride the Reign duology has been! I’m so happy to be back in the Karthia again and back with old and new characters.  Lysander has a new friend, my life is complete.

First  I have to say that this book holds a really special place in my heart because Sarah Glenn Marsh put me in the acknowledgements at the back of the book.  I legit cried when she told me, it meant so much.  Plus, Song of the Dead was released on my birthday and I can’t think of a better gift than having this beauty in my hands.  Sarah is also one of the most lovely people I’ve ever met and is so supportive and kind to me.  I have no words to express how much I love being able to give back and support her and her book career. 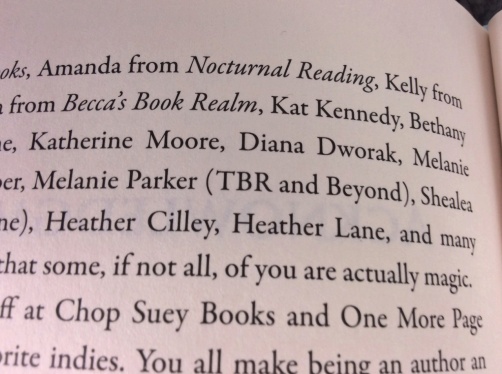 That is me! How freaking cool is that? I’m still in awe! It’s so cool to our group name there as well! Yes, there are actually two Melanie Parker’s acknowledged in Song of the Dead because I share a first and last name with the lovely Meltotheany (whom I’m also lucky enough to call my friend).

Song of the Dead picks RIGHT up where Reign of the Fallen left off, which I love.  Odessa and Meredy have left Karthia and now find themselves in a new place(Sarrel) with some new characters. In Sarrel, they find that necromancers aren’t really welcome guests and Odessa has to be very careful what she reveals about herself and her past. They also discover quickly that this part of the world is being attacked by a clan known as the Ezorans and rumor has it they might just be heading for Karthia and the new crowned Queen, Valoria.  With that news, Odessa and Meredy,  cut their trip short to head back to help their good friend, but not before they pick up a spunky little apothecary named Azelie and a wee little dragon, Nipper on the way.

From there on, we basically see that the group has kind of fallen apart and so has Karthia.  They are now are forbidden to raise the dead anymore and necromancers have become almost useless.  Karthia is also not accepting their new queen Valoria and her new radical ideas.  On top of that our favorite couple, Odessa and Meredy are struggling to figure out where their relationship stands – basically it’s a hot mess back home!

Don’t fret though, all the characters are basically back and have new struggles and successes.  Valoria is busy trying to rule her new kingdom with a lot of pushback from the locals, Jax is drinking a little too much, Kasmira is leading her ship as always and we meet a new student who is a little on the sketchy side, Kartston.  On a really great note,  Danial and Simeon are getting married – yes we get a wedding! I just adore them as a couple – maybe as much as Meredy and Odessa.  Of course, we can’t leave out my complete favorite – LYSANDER the bear! He is back and might just be making a new friend in a certain little talented and feisty dragon. This little friendship gives me total life and Nipper is such a welcome addition and has quite a few talents – I won’t give anything away though!

Song of the Dead takes a little to get started because you are catching up with all the characters and learning what is going on after everything that went down in Reign of the Fallen, but once it gets going – boy does it get intense.  Like the first book, there is a lot of character development and complex world and magic systems.  It’s written brilliantly.  There is also quite a bit more violence and death in this one.  The shit that goes down – let’s just say I was freaking out often by the end.  People die, lots of people die – be prepared!

I think this is an amazing and intricate story and it’s really not a tropey read at all.  It’s quite different from a lot of the other YA stories I’ve been seeing.  I would highly recommend checking this out – I mean did I mention necromancers and beast masters?!?!? What are you waiting for then? Go check this duology out.

Thank you to Razorbill publishing for a physical advanced reader copy (ARC) of this book, in exchange for an honest review.

23 thoughts on “ARC REVIEW: Song of the Dead by Sarah Glenn Marsh”